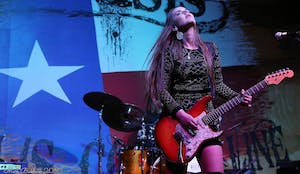 A powerhouse from the Lone Star State, the Ally Venable Band has ignited excitement in the Modern Blues Scene. Lead vocalists and guitarist, Ally Venable, started singing at an early age in church and then in recent years picked up the guitar and found her passion establishing herself as a Texas Blues Guitar Slinger. Ally’s songwriting and onstage performance, proves that she packs a punch.

She has received many awards including the 2014 and 2015 "Female Guitarist of the Year ", three time winner of "Blues Band of the Year", "Album of the Year"- ETX Music Awards 2017.

Guitar Player Magazine stated that," ​ "Venable pulls off a stunner of gritty and/or sultry blues-rock tunes embellished with lots of tasty guitar solos."

Each of Ally’s band mates are versatile on multiple instruments. As Bassist, Bobby Wallace is a master at his craft and his years of experience enhance the band. Drummer, Elijah Owings, brings a steady, but dynamic sound to the band. He is the backbone of their rockin’ blues sound.

Ally’s recent release ‘Puppet Show’ deputed at #7 on the Billboard Blues Charts, and continues to represent the future of the blues.

Born and raised in San Antonio, TX, I was surrounded by the sounds of my heritage which included Tejano, Mariachi and Conjunto music, just to name a few. I also remember hearing a lot of what was referred to as "Oldies", which was just 50's and 60's RnB and Soul. As much as all this music was influencing me without me knowing, it took my own journey to find what really grabbed ahold of me which was Blues and Jazz music. After hearing BB King and Freddie King for the first time I immediately dropped everything and focused on that, learning more about what it was I was listening to and why it had such a profound effect on me. I sought out guys like T-Bone Walker, which then opened other doors into the music genre of jazz and there I found guys like Charlie Christian, Charlie Parker, Django Reinhardt and Duke Ellington among others. Although the original music we're creating is based in Blues, Funk and Soul... (I'm not even sure of that with our sound always evolving) I think you will be able to taste the flavors of everything the band has been influenced by. JP and Aaron are professional musicians well-versed in multiple styles of music. Our goal as performers and as a band is to reach the emotions and thoughts within people that had us all so eager to learn about music and the Universe of sound. We hope to catch you at a show soon, as always... Peace, Love and Music!