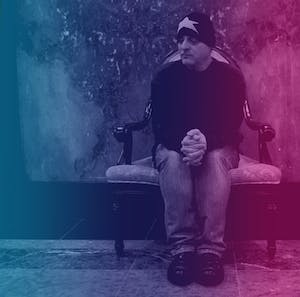 Tickets for Anything Box with special guest T-4-2 go fast so get yours today!

You are having a dream. It takes place in a land of timeless wonder. You can become anyone you want to be in this dream. You can travel through time. You can feel in love with everything. And there are challenges too. You want to be true to yourself. You want to break free of all retraints.

In this dream there's this music running. It pulses. This music makes you feel things. The chirping sounds and the kick drums awaken the primordial you. The sounds of echoing noise takes you farther up. I am in that dream too.

T-4-2 is Jay Gillian and Will Loconto

T-4-2 rose to prominence in the local Dallas music scene, drawing large crowds at every music venue in town. In 1988, Will Loconto replaced Goff and joined the band as lead vocalist. T-4-2 released the cassette-only Hot On Top, fondly remembered as, “The Green Tape,” throughout Texas via Sound Warehouse outlets in 1989, gaining radio airplay in Dallas and Houston. Oak Lawn Records pressed a 12” single of Don’t Let My Love, and an EP, which led to the band signing with Columbia Records for their album Intruder, which spawned 2 singles, Desire and Let Me Go. Desire was in heavy rotation and hit number one on several radio stations across the United States. T-4-2 was featured in Buddy Magazine in 1992 and is included in Rick Koster’s book, Texas Music, The Definitive History of Texas Music From the 1920s to the Present.