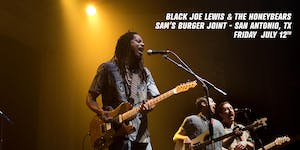 While working at a pawn shop in Austin, Joe Lewis first picked up the guitar. Shortly thereafter, Joe Lewis immersed himself in the local Red River blues/garage scene, recording and performing with Austin luminaries such as the Weary Boys and Walter Daniels. Upon the release of the 2005 Brian Salvi produced Black Joe Lewis and The Cold Breeze EP with standout track "Bitch I Love You" featuring Matt Hubbard on Rhodes electric piano and the 2007 album Black Joe Lewis, both released on Italian label Shake Yo Ass Records, the band gained critical national acclaim and toured as openers for Spoon and Okkervil River in 2007.

The band signed to Lost Highway Records in 2008. Following the signing and performances at 2008's Lollapalooza and Austin City Limits Music Festival, Black Joe Lewis & the Honeybears released a four-song EP on January 27, 2009.

Their debut album Tell 'Em What Your Name Is! was released on March 17, 2009. It was produced by Spoon's drummer Jim Eno.

Black Joe Lewis & the Honeybears were featured in Echotone, a 2010 documentary about the Austin, Texas music scene.

On August 25, 2013, Joe Lewis stated on NPR that he was trying to shed the 'Honeybears' portion of the band's name, and had never intended for it to continue for so long.

​In 2017, his latest album, Backlash, debuted at number 3 in the Billboard Top Blues Albums Chart

The man who never stops moving. First known as the founder and frontman of Soul Track Mind, Donovan Keith embodies the ideals of both stunning vocal ability and infectiously frenetic showmanship. The mystery has yet to be solved: How can a mild-mannered ginger sing AND dance like that?

A native Midwesterner, Donovan chose Austin, Texas, to cultivate his music dreams and moved across the country with no job, friends, or family to receive him and no experience in leading the band he was about to form. Soul Track Mind grew into an outlet for Donovan’s love of soul and R&B music and gave him the perfect vehicle for his first years of development as a songwriter and performer.

From 2008 to 2016, STM was eagerly embraced by the Austin music scene and expanded like a blast wave throughout Texas and the South, out to both coasts, and all the way back to the northerly states of his youth. Donovan’s one-of-a-kind, dance-infused stage show became beloved by fans and acknowledged by reviewers across the country, earning kudos from the likes of Performer Magazine which declared, “Aside from showcasing an impressive vocal range and blues-soaked sound, Keith can engage an audience with his unbridled enthusiasm and dance moves.”

A shift was underway with STM’s third album, Unbreakable (2014), on which Donovan began to assert his creative presence with more complex lyrics and themes closer to his heart and experiences. The album served as Donovan’s catharsis from a dark night of the soul and also as the impetus to launch the next era of his career.

Now this red-haired, soul-singing dynamo has a brand-new project all his own. Combining the voice and moves that fans have grown to crave with fresh new songs and piano skills you never knew he had, Donovan Keith is inviting you along for his next (r)evolution. In 2017 he released an EP, Carry Me On, which gave fans their first taste of Donovan’s latest songwriting direction, and those who knew him from STM embraced his new project in familiar venues and markets around the country, including his highly anticipated annual tours to Florida and West Texas.

2018 brought Donovan a massive infusion of attention, launched with an incendiary performance on the Mohawk stage in January for Black Fret, a music patronage organization whose members seek out the best Austin-based talent and support those artists with a wildly enthusiastic fan community, professional mentoring, and financial support to elevate them to the next level. In December, Black Fret members recognized Donovan with a $20,000 grant, opening more options and opportunity for a 2019 that is sure to be astonishing.