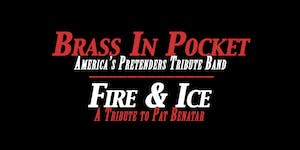 iCal
Google
Relive the music of the Pretenders with Austin's Brass In Pocket and Pat Benatar with San Antonio's own Fire & Ice.

Brass In Pocket is an authentic, rocking tribute to one of the greatest bands in history, The Pretenders --- featuring a spot-on Chrissie Hynde lookalike/soundalike!