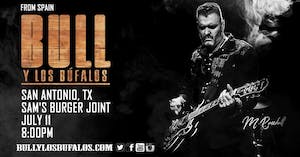 “Bull Y Los Bufalos” is an International Rock band from Spain currently based in Austin, TX. Their original songs, sung in English and Spanish, feel like Southern Rock with a twist of something darker and more complex infused with a Latin vibe.

“Bull y Los Búfalos” played the largest three biker festivals in Latin America to crowds upwards of 25 thousand people. After many successful tours in Spain and Mexico, the band decided to move to the US to grow their audience. Since then, they've played for the NBA “San Antonio Spurs” Game, Texas Rock fest during SXSW 2016 and 2017, the “ROT Rally” for “Cowboy Harley Davidson” one of the most im-portant Biker Fests in the country and many other festivals and venues like Whisky a Go Go in Hollywood and Canyon Club also in California.

On 2017 the band launch a new album "Animal" recorded in Austin, TX. First album in English with some Spanish touch. This new record bets for a raw production with a powerful first single "Road Less traveled" a vintage flavor but fresh and new.

On 2018, after playing in several Biker and Rock Festivals all around the Texas state, the band star touring in Los Angeles and California. Actually on 2019, they are about to launch new singles.