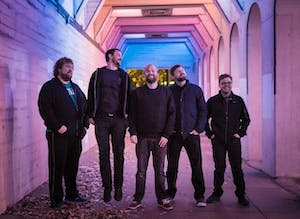 CBDB is a progressive rock n roll jam-band from Alabama and their music is spreading from the southeast across the nation like wildfire. Defining a newfound, southern blend of joyous and progressive funk-rock n roll, dubbed Joyfunk, they channel a sonic mix of soulful vocals and virtuosic musicianship with smart, tasteful songwriting. On stage, each member of CBDB fluidly plays between complex composition and loose exploratory improvisation creating an incredible and unique live experience.

Fresh off an impressive summer tour, CBDB went straight into the legendary Southern Ground Nashville studio to record what will be their third LP, to be released early 2018. Soaring monthly listeners and followers on Spotify have further propelled their growth and continue to bring the band widespread attention, interest and new fans daily. Dive into CBDB's eclectic catalogue of tunes today and catch them live on tour near you soon!

Koodookoo invites you to travel the furthest reaches of the multiverse and dive into the deepest parts of your heart and mind on a consciousness-expanding journey. Formed in 2017 from the live music capital of the world, Koodookoo has developed a tidal wave of sonic abilities that bend reality, push boundaries, and transform all preconceived notions of where music can go. Since busting out in the Austin jam scene in early 2018, Koodookoo has wiggled its ways into the ears and hearts of an ever growing family they have dubbed the Koodookrew. Koodookoo has supported acts such as The Werks, Funk You, and Greasy Hands, and has also headlined several shows in Austin to an always enthusiastic crowd. The band recently released their debut EP, "Koo d'etat," and are booking a busy and exciting calendar for 2019 in Austin and beyond. Keep updated for new events and news because things are moving fast for the Krew!!!