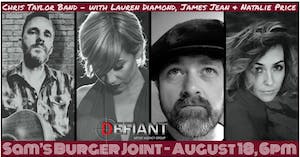 iCal
Google
A great night of music with Chris Taylor and an opening song swap with Lauren Diamond, Natalie Price and James Jean

Chris Taylor is fearless musical and artistic performer from San Antonio, TX. Whether he is solo, with an acoustic guitar and harmonica or with his band (Chris Taylor & The Setting Sons) you can expect a passionate musical experience. “Here's a guy with a voice reminiscent of Jeff Buckley, whose musical approach should appeal to you if you hate bubblegum and want something with more substance!” Mike Rimmer - CrossRhythms

He has cowritten two songs with Dave Stewart of the Eurythmics fame and has over 30 albums to his credit. His latest, self titled album, Chris Taylor, released in 2018, is an intimate acoustic album comprised of songs he's written through the years.

Throughout the 90’s, Taylor was the primary writer and visionary for the band Love Coma, which included Matt Slocum (guitar player for Sixpence None The Richer) and they developed quite a cult following across the US. With both his music and visual artwork, Taylor has remained prolific and prominent in releasing new work for his fans.

Thank you for stopping by and checking out all of my latest happenings ... "Perseverance," is a strong word. It has intense meaning. It speaks volumes to what my thoughts are on life and situations I have climbed through and continue to. I try to be as honest as possible when I write because it is through music where we all could really connect with each other and make a difference. I don't like to say I sound like anyone, but I've been told I'm a cross between Norah Jones & Mazzy Star with an edge.

The songs on the record are all about pushing forward and rising above the storm. I was blessed a couple years ago to be featured on a major compilation record with Joan Baez, Willie Nelson, Jackson Browne, and many others. "Occupy This Album" was produced by Jason Samel and you can check out my song "We're the 99" on iTunes 🙂

I moved from NYC to Austin, TX because I needed inspiration, needed change and needed to do a complete revamp soul search. I knew no one. I didn't have a job. I just took a leap of faith. Prior to that, I lived in Nashville for a short bit and got connected with a ton of talented musicians. Currently, I'm based out of Austin and perform regularly all over the area. I will be doing a full Texas state tour this Summer (2018) alongside with fellow musician, Scott Strickland & recording some material as well.

My tunes could be found on Pandora Radio, ITunes, Spotify, CDBaby and many other digital platforms. I recently released a new single, "Trying to Stop Me," which was a complete 180 spin around from my usual stuff with an electronic pop edge. I had fun recording it because it was such a new and fun vibe along with the team behind it (Haydn Vitera & 512 Studios).

A native of Ft. Worth, Natalie has been singing since she could make noise and writing songs since she got her first guitar. She later moved to Austin and after a warm reception at a local open mic, she began playing music more seriously and hasn’t looked back.

Her style is eclectic, an indie-Americana mix of pop, folk, and little twist of country. Her catchy melodies and smooth voice will put you at ease as she weaves stories of heartache, longing and joy. You might find her playing at local restaurants, coffee shops and house shows around the Lone Star state, or on social media (@natpricemusic on Instagram). Her debut EP, Through The Fog, hit the airwaves in April 2019.