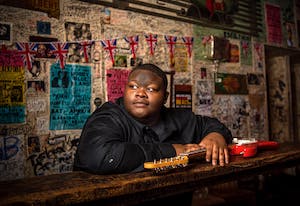 Once a generation, a blues artist comes along who not only reminds mainstream audiences how deeply satisfying and emotionally moving the best blues music can be, but shakes

the genre to its core. With both eyes on the future and the blues in his blood, 20-year-old guitarist, vocalist and songwriter Christone "King sh" Ingram is set to take the music world by storm with the long-awaited release of his debut album, KINGFISH, on Alligator Records. Sprung from the same earth as so many of the Delta blues masters, King sh comes bursting out of Clarksdale, Mississippi, just ten miles from the legendary crossroads of Highways 61 and 49. A student of the Delta's musical history, he is acutely aware of the musicians and the music that emerged from his corner of the world. "I do think I have an old soul, that I've been here before," he says. "I'm moving forward with one foot in the past."

"You don't see too many kids into blues music," says the nascent star. "In my town, every kid wants to be a rapper -- I wanted to do something no one else was doing." And although he grew up near the crossroads where Robert Johnson allegedly cut a deal with the devil, King sh insists he didn't do any of that to make his guitar howl the blues. "I just practice all the time," he says, "that's the only deal I made, and it's with myself."

Recorded in Nashville and produced by two-time Grammy winner Tom Hambridge (Buddy Guy, Susan Tedeschi, Joe Louis Walker), KINGFISH showcases Ingram's blistering, raw and inspired guitar playing, soulful, deep vocals and songwriting. He tells stories with his solos, channeling the spirits of all the past masters while the music he makes is

his own. He co-wrote eight of the album's 12 tracks. "A lot of folks know me for my covers," he says. "That's why it's important for me to release original music." The rst radio single, Outside Of This Town, is a erce statement of purpose -- both musically and lyrically -- from this rising star. The songs range from autobiographical (Been Here Before, Before I'm Old) to humorous (Trouble), and from white hot (It Ain't Right)

to slow and searing (Love Ain't My Favorite Thing). His friend and mentor, Buddy Guy, adds vocals and guitar on Fresh Out while another friend, Keb Mo, brings his warm, conversational voice to Listen, and adds his rhythm and resonator guitars to six tracks.

Since releasing their debut, Dream, Scott and Bob Cerny have built their audience on the road, traveling far beyond their homes — including rural Illinois, where the brothers were raised; Los Angeles, where they sharpened their chops during the band's early years; and Nashville, where both siblings currently live — to play a string of dive bars, living rooms, clubs, and theaters. It's been a musical trial by fire. On countless nights, they've been the new kids in town, relying on their songs not only to make a good impression, but to cut through the clamor of a noisy bar in an unfamiliar city. That kind of touring will sharpen your songwriting. It'll make you louder, too. With Looking For the Good Land, the Cerny Brothers' music takes on an epic edge, expanding far beyond the folksy, acoustic-based sound of their earlier albums to embrace the storytelling, supersized hooks, and cinematic punch of American rock.

Traveling from town to town also opened the brothers' eyes to the diversity of U.S. society. They made friends in liberal cities, conservative towns, and everywhere in between. Along the way, Scott and Bob took note not only of the things that make each American unique, but the connections that pull us together, too. They realized that regardless of an individual's past, everyone seemed to have one thing in common: they were searching for their own peace of mind. Looking For the Good Land nods to that universal journey, examining what it means to be part of the American story.

"We're not looking to push any specific ideology," says Scott. "We're just making observations about what we've seen. Across the country, whether you're a musician or a plumber, you're looking for your piece of the American pie. Everyone is."