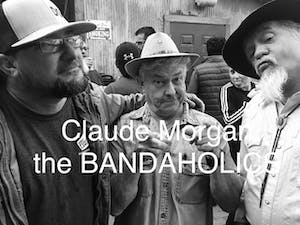 Claude Morgan and His Bandaholics

iCal
Google
Join us for an evening with Claude Morgan and His Bandaholics --- Limited Tickets, Fully Seated Show with social distancing

Get your table ticket today for Claude Morgan and His Bandaholics !

Face masks must be worn while not seated at table.

All seating inside and outside has been set up to allow for social distancing and may not be moved.

The inside bar is closed but table service will be provided.

Guests will have access to hand sanitizing stations upon entering and throughout the grounds.

Our staff will be wearing masks.

Buy Online to Guarantee Entry for Claude Morgan and His Bandaholics today!

Claude Morgan and His Bandaholics

“I suspect Butch Morgan must write his songs, not just in between, but WHILE he is building a table, or driving state to state and gig to gig, or checking in on his friends, or doing something nice for somebody, or painting his house, or painting one of his artful paintings, or any number of other things he does so well and with so much compassion for his fellow creatures on this planet... 'Cause his songs reflect all this and all the love he has for the humane side of the human sojourn... Listen up and listen up good!” - Butch Hancock

Claude Butch Morgan was told he had an “ear for melody” when he was in fourth grade and tried out for the school band in Hondo, Texas. The instructor handed him a trumpet and Butch found a musical home that lasted all the way through high school. He also picked up his Dad’s guitar in the thick of Beatlemania; Butch tapped his ear for melody and immediately figured out the Bonanza theme. The guitar has remained his creative and traveling companion throughout his career spanning four decades. Over the years, however, Morgan has grown into a triple threat on the Texas music scene; he is a songwriter, storyteller, and guitarist who is constantly pushing his limits as a performer. His live show, much like his life story, is not like anything music fans have ever seen before.

While it has been said that music saves lives every day, music has literally saved Butch Morgan’s life more than a few times. He was drafted into the service out of high school and while in basic training, a Sergeant overheard him playing guitar. The Sergeant requested he play Buck Owens, and Butch complied. He was immediately given the task of playing in the secret Master Sergeants’ Club every Friday throughout the rest of basic training, where he built his reputation as a musician and was asked to put a band together. His orders to Vietnam were changed twice and he was diverted to Germany instead to join the USO as a guitar player and entertain the troops across Germany at various missile bases.

After the military, Butch returned home to the San Antonio area and continued to make music. He had become a respected guitar player but remained dedicated to being a songwriter, navigating with skill through the country, folk, blues, and rock genres to create his own sound. Preparation once again met opportunity when Morgan was offered the opening slot on a residency for a new-to-Texas songwriter named Willie Nelson at Floore’s Country Store in Helotes, Texas. Morgan and Nelson took the stage every third Saturday of the month for a year, and the crowds soon caught on and the “Redheaded Stranger” was packing them in every month. Morgan took copious notes on Nelson’s performance style. “It changed how I perform...Willie worked the crowd and played for four hours every night. I learned a lot.” He released several albums with bands like The Buckboard Boogie Boys,The Blast and the H!X.