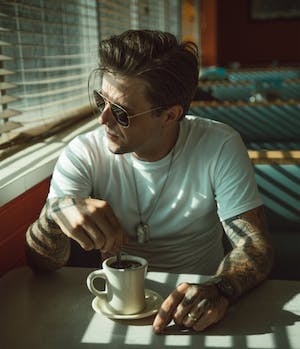 “Life is never going to go exactly the way you think it will,” says Eric Tessmer, “but I’ve come to appreciate that fact. Good things take time.”

Tessmer’s stellar new release, ‘EP II,’ is proof of that. Three years in the making, the collection was recorded in Los Angeles with acclaimed producer Sean Beavan (Nine Inch Nails, Guns N’ Roses), and it finds the incendiary Austin guitarist matching his technical flash with new heights of lyrical craftsmanship and studio sophistication. The performances here represent Tessmer’s most raw, powerful work to date, tackling sobriety, commitment, and redemption with both deep insight and fearless vulnerability. It’s a remarkable step in an already remarkable career, one that showcases a virtuosic instrumentalist boldly stretching his limits and embracing his artful evolution as a singer and songwriter.

“I wanted to go deeper than I ever have before with this EP,” says Tessmer. “I still love ripping things up on the guitar, but this time around, I wanted to save that more for the live show and really focus on concision in the studio.”

A Wisconsin native, Tessmer developed his love affair with music through a kind of familial osmosis. Both his grandmother and father played guitar, and Hendrix, Led Zeppelin, and Cream were all staples around the house growing up.

“My dad took my older brother and me to see Pink Floyd when I was twelve,” says Tessmer. “I remember watching David Gilmour play the solo to ‘Comfortably Numb’ while this giant disco ball opened up like an iris. I said to myself, ‘I want to make people feel like this. I’m going to play guitar for the rest of my life.’”

Inspired in part by watching reruns of Austin City Limits on his local PBS station, Tessmer moved to Texas straight out of high school, and he quickly garnered a formidable reputation there for his fierce fretwork and explosive live performances. He cut his teeth playing residencies in clubs and bars, shared stages with everyone from Gary Clark, Jr. to Tab Benoit, and released a series of live and studio albums that earned widespread critical acclaim, with the Austin Chronicle dubbing him an “SRV-fast firebrand” and the Austin American Statesman hailing him as a “working class guitar hero.” While some artists work so hard they practically live in their rehearsal spaces, Tessmer took things a step further, literally building a bunk into the “glorified closet” where he practiced in order to make it his full-time home.

“At first I didn’t even have a futon or a sleeping bag, and the only bathroom was a shared one down the hall,” he remembers. “It was a tough transition, but it really did help so much because I could play as loud as I wanted whenever I wanted. Spending all that time by myself in seclusion really helped me pick up material, too. When you live in your rehearsal space, you’ve got nothing to do but either practice or think about your life.”

Following the successes of his debut album Hard Times, Straight Lines which led him to stages nationwide and entrenched him in notable Texas venues such as Antone's, C-Boy's Heart & Soul, and Gruene Hall, Austin's triple-soul-threat Aaron Stephens set out to craft a follow-up record taking his sound to new heights.

Focus, released August 2018, not only meets, but exceeds all expectations. Backed by his five-piece band and brimming with vibrant grooves, Focus highlights Stephens' uncanny songwriting chops, the album shining with equal parts invigoration and innovation. Of course, Stephens' inviting, warm, rich, vocals stand out at the front. Often drawing vocal comparisons to Bill Withers, Stephens' voice is a highlight throughout every verse on every track, constantly capturing your attention no matter the subject or style. Also present throughout is Stephens' brilliant guitarwork; sometimes subtle, sometimes striking, and occasionally surprising, whether it's Derek Trucks-inspired slide texturing or his own take on soaring contemporary blues-inspired grooves that take the best of John Mayer mashed with 70's-era Clapton to drive the song home.