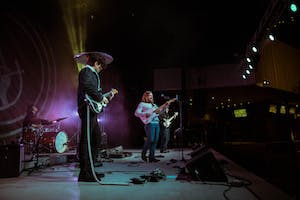 Cooper Greenberg is a guitarist and singer-songwriter based out of San Antonio and Austin, Texas. Influenced by a wide array of artists, songwriters, and genres, his writing style combines intricate, guitar-driven melodies with personal, storytelling lyrics. Over the past several years, Cooper’s performing has brought him through some of Texas’ most historic and beloved venues, from the small stages of Austin’s 6th Street and San Antonio’s St. Mary’s Strip, to platforms as large as The Kerrville Folk Festival. Cooper has been chosen as a featured artist on Fretmonkey Records (Arkansas), performed for Texas Public Radio's "Worth Repeating" and “TPR Live” series, and often works with San Antonio’s Alamo Music Center as an online presence for musical instrument reviews, which have garnered over 350,000 views in total. He also placed 1st in the San Antonio Guitar Wars. In December 2016, Cooper released his debut EP "Wave Pool,” and a full band follow-up, “Dream Sequence” in 2018, recorded at Matador Recording Studios.