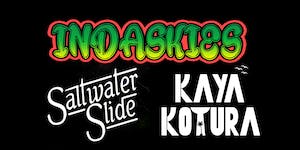 InDaSkies was created during the fall of 2012. A band that started in a friends garage and has come a long way to get where they are now. InDaSkies is a unique style of experimental reggae with intentions to provide unity through Music to their fans. InDaSkies is made up of some solid musicians and Great Friends. They have Front man Joe Serrato Holding down the Vocals and rhythm guitar. He has a Hip Hop sing flow approach to the reggae groove which blends well with the styles of the other members. like Seasoned Drummer Ryan Damian providing an awesome Dynamic tempo and controlling conscious explosions that make you want to move those feet. Holding down the Low end and also singing vocal Harmony, is James Herrington. He plays a funky bass groove that has some southern blues influences along with a psychedelic rock undertone. Completing the rhythm section is auxiliary percussionist David Rios aka Chango. Not only does David provide sweet syncopated accents to the already tight rhythm section he adds some of his own flavor to the mix as well. Their Lead Guitarist Marcus Tabet comes from a progressive metal background giving InDaSkies a unique reggae sound all of its own. The newest addition to InDaSkies is Keyboardist Chris Ranew expanding the styles of InDaSkies with Jazz influenced grooves. Last but not least is Saxophone player Derrick Rosette sending out vibrant burst of air completing the full melodic range of harmonic expression.

InDaSkies released their first EP "Essential Vibrations" early spring of 2017 it is available for purchase on every musical platform such as iTunes, Spotify, youtube, google play, Napster, Amazon, etc...

InDaSkies just came off their first tour making some great memories and developing a solid fan base throughout their journey to the east coast.

look for these guys touring in a city near you with new music coming early 2019.

Kaya Kotura is a reggae band from San Antonio, Texas. Formed in August 2017, they have since introduced their sound to the growing Texas reggae scene in San Antonio, Austin, and Corpus Christi

What does Kaya Kotura mean?

Kaya Kotura consists of two different words that come together to represent a mentality. The word Kaya is often used as a slang word for marijuana, but we like to associate it with it’s South African definition which is used for home, shelter or restful place. Kotura is the Chamoro (native language of Guam) spelling for culture.

We try to think of both words and their meanings together to create and mentality or mission statement. Almost like a different interpretation of Bob Marley’s lyric “Gotta have kaya now, for the rain is fallin”. We hope that our sound adds to the music culture, providing shelter from the negativity in the world and that maybe even for a few minutes we can help people forget the stresses they might be going through in their lives.