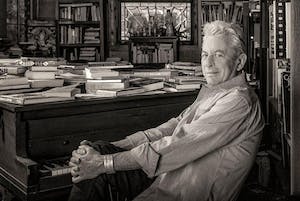 Lubbock, Texas in 1973 was a pretty great place and time to chase a life in music, even though hardly anyone realized it back then, least of all Joe Ely.

The Flatlanders, the storied folk trio he’d formed with Jimmie Dale Gilmore and Butch Hancock, had tried and failed in their quest become Nashville recording artists. In the aftermath, Joe high-tailed it to New York to work on songs and play folk clubs before deciding to join the circus. He hired on with Ringing Brothers and Barnum & Bailey as caretaker for llamas, the World’s Smallest Horse, and two white stallions, Omar and King. When a horse kicked him during a performance and broke three ribs, he came back home to Lubbock.

What was he going to do?

He thought about it awhile and decided he’d be Buddy Holly.

Not literally, although it should be noted that no significant rock and roll performer had emerged from Lubbock since the chart-topping Holly died in a plane crash in 1959. You could say there was a vacuum waiting to be filled.

Joe Ely proceeded to write some new songs, polish some old ones, and cop a few from Butch and Jimmie, put a band together, sell his life insurance policy to buy a PA sound system, strap on a guitar, step out front, and roar.