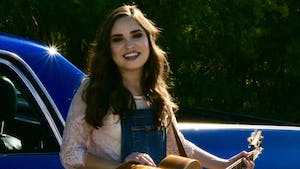 iCal
Google
Join Marcy Grace for the release of her new album "No Limits". Drew Moreland opens show. A portion of ticket sales benefiting Any Baby Can.

No Limits is the embodiment of who Marcy Grace is: a force to be reckoned with. Pushing the limits of country music with elements of rock, Americana, and pop, No Limits is a high energy and attention-grabbing collection of songs.

Each song on No Limits has its own uniqueness. A love at first sight story from the album’s opener “I Wanna”, to a good old-fashioned song about life in “Country Livin’ 101”, Marcy is sure to hit home in listeners’ hearts. With a little bit of twang and rock n’ roll, Marcy’s vocals soar on the guitar-driven “Like I Do” and upbeat hit “El Camino”. Giving a raw vocal performance, “Him First” provokes listener’s emotion.

Known for her unique and big voice, Marcy Grace is a multi-instrumentalist, playing drums, guitar, and keyboards. In 2018, Marcy Grace won NEW FEMALE VOCALIST of the year by the Big Star 97 Awards. She was also nominated for 2019 Best New Female Vocalist by the Texas Regional Radio Music Awards. Her first single to radio, “I Wanna” reached # 37 on the Texas Radio Charts and was included on the Texas Music Pickers Best New Single Poll. Marcy’s band has opened for Bart Crow, Joe Ely, Sunny Sweeney, Jamie Lin Wilson, Thom Shepherd, John Baumann, Two Tons of Steel, The Americans and has been invited to sing with Susan Gibson (Wide Open Spaces).

Born on January 12th, 1984 in San Antonio, TX, Drew Moreland was raised in a city with many converging cultures. Despite growing up in what is now the 7th largest city in the United States, Drew's life was grounded by his parents who both came from a small farming community. From an early age, he enjoyed listening to music and playing it came naturally. Drew currently resides in Marion, TX