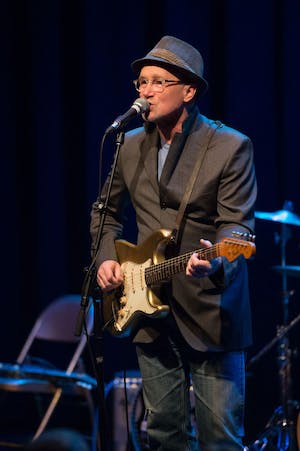 iCal
Google
The great Marshall Crenshaw makes a stop here at Sam's for what is to be a memorable night of music. Jeff Glatz opens the show.

Born in 1953 in Detroit, Michigan, Marshall Crenshaw learned to tune a guitar correctly at age ten and has been trying ever since. His first big break came in 1978 playing John Lennon in "Beatlemania", first as an understudy in New York, then in the West Coast company followed by a national touring company. Removing himself from that situation in Feb. 1980, Marshall settled in New York City. After crossing paths with the great and legendary Alan Betrock, Marshall recorded his debut single "Something's Gonna Happen" (for Betrock's Shake Records label), which led to a deal with Warner Bros. His debut album, Marshall Crenshaw, was acclaimed as a masterpiece upon its release in 1982 and established him as a singular songwriter, record maker, and guitarist. The album spawned the hit single "Someday, Someway," and other classics such as "(You're My) Favorite Waste of Time", "Whenever You're On My Mind" and "Cynical Girl.”

Over the course of a career that's spanned three decades, 13 albums, Grammy and Golden Globe nominations, film and TV appearances (Buddy Holly in “La Bamba") and thousands of performances, Marshall Crenshaw's musical output has maintained a consistent fidelity to the qualities of artfulness, craftsmanship and passion, and his efforts have been rewarded with the devotion of a broad and remarkably loyal fan base.

Along with touring around the country and the occasional recording project, Marshall currently hosts his own radio show, "The Bottomless Pit", every Saturday at 10 PM on New York's WFUV. (http://www.wfuv.org/content/bottomless-pit) Other current projects include a documentary film-in progress about legendary record producer Tom Wilson. Says Crenshaw, "This is a road that I never imagined taking before, but it's been amazing and is going great..”

“Although he was seen as a latter-day Buddy Holly at the outset, he soon proved too talented and original to be anyone but himself.” - Trouser Press

"Listening to the songs on Jeff Glatz's Multiverse EP reaffirms my feeling that music makes the world a better place. These songs are a perfect traveling companion for late night drives. Sit down for a closer listen when you get home, and you’re rewarded with a beautiful sonic landscape, crafted to perfectly frame Jeff’s heartfelt vocals. You're transported to where only good, real music can take you. Highly recommended." ~ Bob Andrews (Undertow Music Collective)

The upcoming four-track EP was mixed by Duane Lundy of Shangri-La, in Lexington, KY, whose work with Jim James, Ben Sollee and These United States drew Glatz to him. Lundy's knack for delicate, atmospheric touches was right in line with Glatz's production ideas for these deeply personal songs, making it a perfect creative fit.

Glatz made a name for himself playing alongside his brother in Peacefield, a rock band with a grounded, organic sound, originally based in Pittsburgh, PA, and relocating to Texas. During the band's recent hiatus, Glatz began work on his solo EP. Following a number of cozy performances in his living room from notable artists such as Will Johnson of Centromatic and Monsters of Folk, as well as Sarah Jaffe and David Bazan, he was inspired to take his music in a more intimate direction. The result is "Multiverse," his most personal album to date.