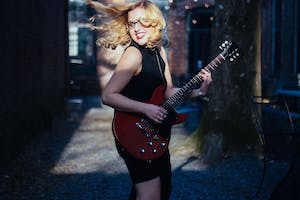 Meg Williams performs frequently at venues across the country with her band, Meg Williams Band, as a solo/duo act, and as a guitarist for other artists. She recently competed in the 2019 International Blues Challenge (Memphis, TN), representing the Kentucky Blues Society, and was the house band director for the Women in Blues Showcase during the IBC's. Meg has additionally performed main-stage at the 2018 Venice Blues Festival (Venice, FL), RedGorilla Music Festival (Austin, TX), Blues Radio International during the BMA's (Memphis, TN), Knoxville’s WDVX Blue Plate Special, Tennessee Motorcycles & Music Revival Festival, & Loretta Lynn’s Ranch as an artist, and performed at Cheyenne Frontier Days & CMA Fest as a guitarist for other artists. Meg is set to perform at the 2019 Tall City Blues Fest in Midland, TX.

Meg’s newest blues-rock CD, 'Take Me As I Am: The Muscle Shoals Sessions' and her 2017 EP ‘Maybe Someday,’ have been played on SiriusXM’s Bluesville and radio stations world-wide – 'Take Me As I Am' has reached #27 on Top 50 Blues Album Charts & #9 on Top 50 Blues Rock Album Charts (Roots Music Report). Meg's song 'Little Bit of the Devil' reached #2 Top 50 Blues Rock songs & #9 Top Blues Song (Roots Music Report). Often compared to Susan Tedeschi and Bonnie Raitt, Meg’s guitar playing has captured the attention of listeners throughout Nashville and increasingly the US.

Meg just signed with Nola Blue Records and released her full length album, recorded at FAME Studios in Muscle Shoals, AL, "Take Me As I Am: The Muscle Shoals Sessions" on April 19, 2019.