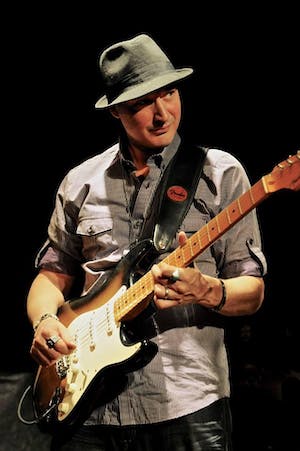 Murali Coryell has a story that is unique and has been growing since before he was born. Held by Hendrix, lived with Santana, dinners with Miles Davis, opened for B.B. King , played with Buddy Guy: Murali Coryell is an artist that defies category. Jim Hynes of Elmore Magazine writes in review of “Made In Texas”, “With this, his ninth album, the talented guitarist and soulful vocalist Murali Coryell continues to expand his repertoire, yet his deep soul certainly remains intact.” “ With ‘Made in Texas’, Larry’s son, Murali Coryell offers everything the music lover could wish for: good songs, sufficient variation and an excellent band. More than reason not to doubt his new release!... “ (ESC for Rootstime.be).

In an eerie, surrealistic dream about this drummer, he is laid out on an autopsy slab and sliced open by a medical examiner. Music pours out of his insides instead of gruesome guts. All kinds of music, too: jazz, blues, country, rhythm and blues, rock and roll and of course Tex-Mex. "This guy must be from Austin," the medical examiner mutters, revealing his astute knowledge of the American music scene which is hopefully matched by his cutting skills.

Actually, Ernie Durawa was born in San Antonio, but he has been a major player on the Austin music scene for decades. His ability to totally transcend stylistic barriers has made him an important part of various bands that do the same thing, most notably the all-star Texas Tornados featuring his life-long friend Doug Sahm as well as country and western legend Freddy Fender and Tex Mex maestro Flaco Jimenez. Durawa was also the drummer for the unique singer and bandleader Delbert McClinton for a long bluesy stretch which ended in 1981.

Durawa's influences coming up in San Antonio were an incredibly lively mix of all the previously mentioned styles. As a drummer he was taking in the art of various rhythm and blues backbeats as well as the profound rhythmic inventions of bebop masters such as Max Roach. The drummer has seemingly pushed jazz further and further to the front in his list of priorities as the years go on, a welcome development on a music scene that seems to welcome jazz elements but garners much more notoriety from the more commercially-friendly, butt-shaking sounds of rock and roll and rhythm and blues.

The original West Side Horns, Rocky Morales (tenor sax), Louie Bustos (tenor, baritone sax) and Charlie McBirney (trumpet), started working together, off and on, in the '60s, before the crew had a name. While they consistently worked various gigs, together and apart, the horns gained their moniker, and an international identity among those who read the small print on album covers, via their work with Doug Sahm and Augie Meyers. When McBirney left the road, trumpeter Al Gomez stepped in. They are all about Conjunto, Tejano, Jazz, and the Blues.