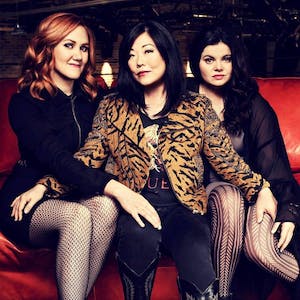 Hailing from Texas, Alabama, and Georgia respectively, now neighbors in Austin, BettySoo, Grace Pettis, and Rebecca Loebe are bewitching audiences with sumptuous harmonies and unforgettable songwriting. Friends now for a decade, they first met at the legendary Kerrville Folk Festival, each winners of the annual “New Folk” award. Luscious harmony singers, effortless instrumentalists, seasoned touring artists – they recognized what each can accomplish individually could be made all the stronger by collaboration. Now, the spark has been set, the fire lit. Their individual and collective fans are eating it up. A video of “Fast Car” garnered twenty-thousand views on Facebook within days of posting. The harmonies are thrilling; echoes of Emmylou Harris, Dolly Parton and Linda Ronstadt’s Trio recordings. The songs are powerful and spare. The stage presence confident and assured. Their collabortion has resulted in their debut EP, Waterline, under the band name NOBODY's GIRL, released in the fall of 2018 on the Lucky Hound label.

Nicolette Good is a Texas singer-songwriter and 2012 Kerrville New Folk winner. In a voice that’s at once refined and raw, Nicolette sings with penetrating insight about hope, wrenching love, and the mysteries of everyday life. Her effortless storytelling shines on her latest release “Little Boat on a Wave” (2015) in toe-tappers like “Union Jack,” “Tehuacana,” and the title track, which was inspired by actual events. Several cuts from Little Boat were composed during an artist fellowship at The Lighthouse Works in Fishers Island, New York. Critics have called her “a songwriter to follow” and “a poet of the first order.”

Based in Austin, Texas, Nicolette released her first full-length, “Monarch” (2012), recorded at Ramble Creek Recording Studio. It includes songs like "Hurricane Caroline" and “Pretty Clementine,” which tell intimate stories of enigmatic, tragic characters, as she sings with penetrating insight about hope, wrenching love, and the mysteries of everyday life.

A Houston native, Nicolette is also a staff musician for Home Street Music, an Austin non-profit using music to empower people who have experienced homelessness.

Critics have called her “a songwriter to follow” and “a poet of the first order."

"Good is an insightful and unsympathetic observer of the world she sees around her ... and imagines for us." - D.c. Bloom, Lone Star Music Magazine

Colin Gilmore grew up in Lubbock, Texas, spending many nights as a child in nightclubs like Stubbs, where he witnessed songwriters like Joe Ely, Terry Allen, and his own father, Jimmie Dale Gilmore, bring the stage to life. He later developed a taste for Buddy Holly, Townes Van Zandt, and bands like The Clash and The Pogues. For 14 years, Colin has been informed by these observations, writing songs and playing shows in a style that is truly his own. His three full length albums have won critical acclaim and a fan base that spans the world. His second album Goodnight Lane received 4-star reviews in Mojo and Uncut, and his latest album The Wild and Hollow was named "Best Americana/singer-songwriter album of 2013" by Huffington Post's Mike Ragogna. He recently performed in, wrote songs for and selected the other original songs for the film La Barracuda, which received loads of critical praise at the SXSW 2017 film festival and was noted for the effect the music had on the film. Colin is currently working on another album with celebrated producer-artist Richard Barone.