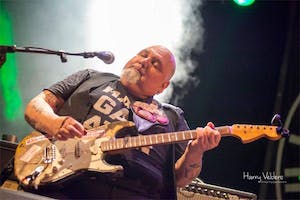 Popa Chubby, born Ted Horowitz, has been hard rocking the blues in his fierce and soulful way for more than 25 years. Over the course of a career that dates back to 1994, he has been a force of to be reckoned with on the guitar, and his tempestuous, soulful playing has never been more powerful. An imposing figure with a shaven head, tattooed arms, a goatee and a performance style he describes as “the Stooges meets Buddy Guy, Motörhead meets Muddy Waters, and Jimi Hendrix meets Robert Johnson,” Popa Chubby is an endearing character who is one of the genre’s most popular figures.

His career has always been about moving forward and carving a place for himself in the imposing terrain of the music business, overcoming odds to continue growing and maturing as a creative force. He has built a constantly increasing base of fans across the world, where in many territories he is a star. A native New Yorker, Horowitz’s first gigs were in the NYC punk scene as a guitarist for what he reflects was a “crazy Japanese special effects performance artist in a kimono called Screaming Mad George who had a horror-movie inspired show.” Right from the start he was immersed in rock ‘n’ roll as theater, and learned from George and others playing CBGB’s at the time that included the Ramones, the Cramps, Richard Hell, whose band, the Voidoids he joined that rock ‘n’ roll should be dangerous. He reflects, “Musicians like the Ramones and the Sex Pistols weren’t just bands. They were a threat to society.”

The Blues however was the foundation of his playing style. He recalls, “Since I’d grown up on Hendrix, Cream and Led Zeppelin, when I started playing blues in New York clubs I understood that the blues should be dangerous, too. It wasn’t just from playing in punk bands. Howlin’ Wolf and Muddy Waters were dangerous men. They’d cut or shoot you if they thought it was necessary, and Little Walter packed a gun and wouldn’t hesitate to use it. That danger is a real part of the Blues and I keep it alive in my music.”

Popa Chubby is his own man for better or worse. He reflects, “I’m living in a wild time, and that is where the inspiration is drawn from. There are my issues, but the picture is much bigger than me and my situation. Everything is breaking down in the world. The lines are being redefined. We all need something.”

Jeff Plankenhorn plays a soulful, distinctly Austin brand of roots rock that, over the past several years, has gained him a devoted national following and a seat among the very best contemporary Americana songwriters. His confident, catchy-as-hell fourth studio album, Sleeping Dogs was released to rave reviews (Rolling Stone Country, the Boot, Twangville, among others) and spent a good chunk of 2018 on the Roots Rock and Americana radio charts (#5 and #44). The four-piece band that bears his name has become a favorite on the festival circuit, scoring spots at Old Settlers Music Festival, Kerrville Folk Festival, Telluride Americana Music Festival, and Austin’s annual New Years Eve blowout at Auditorium Shores.

Well before he started rocking festival stages as a solo artist, Plankenhorn was already in the musical DNA of his adopted home of Austin, Texas. His bluesy, slide-driven guitar style was born out of jam sessions, residencies and house shows played for local audiences eager for the electricity and edge-of-your-seat musicianship that makes Austin the live music capital of the world. “In Austin,” he says, “few players rehearse. You show up and you play, for better or for worse.”

That freewheeling philosophy, and the disciplined songwriting craft that underpins it, is the result of Plankenhorn’s almost ten-year run as a member of the Resentments, a supergroup of sorts that hosts one of the longest running residencies in Austin. Every Sunday for the last 20 years, a rotating cast of Austin’s best songwriters has brought their newest tunes to debut at the Saxon Pub, an Americana stronghold on the famous Lamar Street. The group walks a tightrope between improvisation and songcraft that is thrilling. This musical bootcamp sharpened Plankenhorn’s writing process and gives his songs a lived-in ease.

Over the course of five solo albums, Plankenhorn has drawn on a wide range of styles, combining influences from electric blues, progressive bluegrass, sacred steel, and power-pop to create a musical identity all his own. A big part of it is his voice. Plankenhorn grew up in Ohio singing choral music as a boy soprano. The vocal clarity and power he developed in those early years is evident in the soulful baritone he employs now.