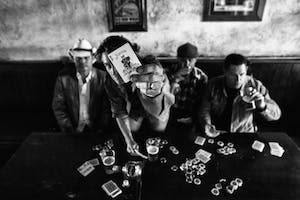 Giovannie and the Hired Guns

iCal
Google
A great night of music as Roger Clyne and the Peacemakers return to Sam's. Giovannie and The Hired Guns open the show.

Roger Clyne and the Peacemakers

Hailed as one of the most exciting live acts on the road today, Roger Clyne & The Peacemakers are musical beacons of the Southwest fueled by witty and insightful lyrics, crunching guitar riffs, a dynamic rhythm section and tequila. RCPM are the only act to release seven consecutive studio albums to land on the top 10 of Billboard’s Internet Sales Chart, two at No. 1, all released on a 100% independent record label.

Dubbed the “Springsteen of the Southwest” by the Asbury Park Press, Roger Clyne and his guitar have toured around the world over his 20-year career, starting with The Refreshments. The seminal Tempe, Arizona band made big waves in the ’90s both on college and alternative rock radio as well as MTV with the songs “Banditos” (with the infamous chorus, “Everybody knows that the world is full of stupid people”) and “Down Together” as well as writing the theme for TV’s “King of the Hill.”

More than 20 years later, Clyne and Refreshments drummer PH Naffah, along with bassist Nick Scropos and lead guitarist Jim Dalton keep the songs of The Refreshments alive, while adding to their own ever growing musical legacy. RCPM’s latest album is, Native Heart, and marks the 10th studio album released by Roger Clyne & PH Naffah.

A testament to their growing and extremely loyal fan base is the band’s annual music festival in Rocky Point, Mexico, called Circus Mexicus. What began as a rooftop show thrown together with extension cords and wooden pallets more than 15 years ago has blossomed into a pilgrimage that draws thousands of fans to the once sleepy fishing village. In 2014, fans from 43 states and 7 countries represented at Circus Mexicus.

Clyne not only sings about life in the border-lands, he also produces his own private label top shelf tequila called Mexican Moonshine. From Gold medals in the San Francisco World Spirits Competition to Gold Ribbons from Tequila Aficionado’s Brands of Promise, accolades have been rolling in. And a bottle of Mexican Moonshine Tequila made a well received “guest appearance” on the Rachel Ray Show.

In 2016, Clyne’s career came full circle as Roger Clyne & The Peacemakers celebrated the 20th anniversary of The Refreshments cult classic debut album, “Fizzy Fuzzy Big & Buzzy,” with a residency at the Yucca Tap Room in their hometown of Tempe, followed by a nationwide tour.

Back in 2015, when Giovannie Yanez decided to put a band together, he wanted to form a band of brothers who could put on a high energy show and deliver a sound that the Texas Country scene had never seen before.

It’s 2019, and Giovannie and the Hired Guns have done just that. This group out of Stephenville, TX has made a name for themselves in the Texas music scene, where they’re known for playing thrilling shows that will always keep you on your toes. The band is made up of Giovannie Yanez (Vocals/Acoustic Guitar), Chance Bannister (Lead Guitar), Adam Urbanczyk (Rhythm, Lead Guitar), Alex Trejo (Bass Guitar), and Milton Toles (Drums).

New for 2019 is their single “Lover Boy”, a catchy, upbeat love song, and the first new music since the band’s first album, “Bad Habits”. On that note, the band is in the process of putting together their sophomore album, with a release planned later in 2019.