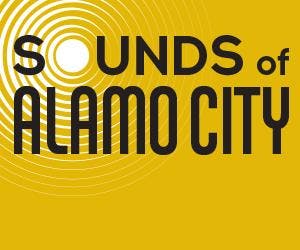 The Sounds of Alamo City is a homegrown music festival showcasing local artists currently featured in the City Council Music Spotlight Program (Music Commission). The program features 20 San Antonio-based musicians whose songs can be heard on broadcasts through TVSA at Time Warner Cable 21; Grande Cable 20; AT&T U-verse 99; and online on the TVSA website.

This inaugural event will be headlined by The Gunslingers, an outlaw country outfit that has been burning up Southwest Texas over the last year. With television appearances and opening spots for national artists, The Gunslingers San Antonio swagger is gaining recognition on the bigger stage. They were grateful to be part of the City Council's program and look forward to more collaborations with their fellow artists.

River Barons is a rock alt-country band from San Antonio playing "South Texas Rock". Their influences are rooted in rock, country, and blues.

Featured songs: "Down This Road"

Laura Marie is an Independent Music Award Winner, two time regional finalist in the Mountain Stage NewSong Contest, and winner of the OurStage Lilith Fair Competition for the State of Texas. Her music is licensed worldwide to television and film through Human Factor Publishing.

In 2013 she auditioned for ‘The Voice’ and had several callbacks. In 2014 she competed in KWC ‘Karaoke World Championships’ where she went to regionals, then state, and then to the nationals where she won 6th in the nation.

Jeff Jacobs grew up in San Antonio from the age of 5. He lived in a poor neighborhood on the southwest side of town. In his teenage years he started playing the guitar, thanks to a nudge by his older brother, and started writing songs. Jeff decided that country talked to him more than any genre. “Country music is about everyday life”

Featured songs: "Break His Heart Tonight", "Feels Alright To Me" & "Spend Some Time"

Larry D. Moralez is a Native Texan, born and raised in San Antonio. As a lifelong musician with eclectic tastes, his musical selection and original compositions reflect passion, emotion, and diversity.