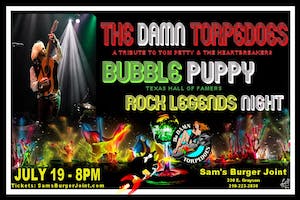 The Damn Torpedoes A Tribute to Tom Petty & The Heartbreakers

The Damn Torpedoes - Tribute to Tom Petty and the Heartbreakers

The Damn Torpedoes have it: attitude, mojo, chemistry, skill, determination…and use those qualities to pay tribute to an American band who for 4 decades were the pure embodiment of the same, Tom Petty and the Heartbreakers.

Since the mid-70s, Tom Petty and the Heartbreakers have churned out unforgettable classic rock gems. From “American Girl” and “Into the Great Wide Open” to “Free Falling”, “Mary Jane’s Last Dance” and beyond, they have left an indelible mark on the American pop cultural landscape. Such staying power is a testament to the fact that the whole is always greater than the sum of its parts. While no one will argue with the fact that Tom Petty is one of our greatest songwriters, Tom always spoke of the fact that he couldn’t have done it without his band. Amazing musicians like Mike Campbell and Benmont Tench have contributed to a sound that’s unmistakably the Heartbreakers.

The Damn Torpedoes, whose name is a play on the seminal ’79 Petty album, Damn the Torpedoes, are long-time Austin musicians who have fashioned themselves in that mold: guys that have been around the block but attack the Petty hits like a hungry, young band out to conquer the world. By emphasizing intangibles like chemistry and staying power, The Damn Torpedoes recreate the sound and feel of one of the world’s greatest bands. Painstaking attention to detail - tones, arrangements, harmonies, performance and look - will give the audience an experience that’s as close to Tom Petty and the Heartbreakers as you’re going to find.

ORIGINS: Bubble Puppy was formed in 1966 in San Antonio, Texas, by Rod Prince and Roy Cox who had previously performed together in the rock group called the Bad Seeds. Looking to form a "top gun rock band" based on the concept of dual lead guitars, a staple of southern rock that was highly unusual on the psychedelic music scene, Prince and Cox recruited Todd Potter, an Austin, Texas guitarist. With the addition of Danny Segovia and Clayton Pulley, the original line up of Bubble Puppy was complete. The name "Bubble Puppy" was taken from "Centrifugal Bumble-Puppy", a fictitious children's game in Aldous Huxley's Brave New World. Bubble Puppy's live debut was as the opening act for The Who in San Antonio in 1967.

After a few line-up changes (drummer Clayton Pulley being replaced by Craig Root, and the departure of Danny Segovia), the final roster for Bubble Puppy settled at Rod Prince and Todd Potter on lead guitars, Roy Cox on bass guitar, and David "Fuzzy" Fore on drums. In the spring of 1967, Bubble Puppy moved to Austin, Texas and signed a recording contract with Houston-based International Artists, home to the 13th Floor Elevators and the Red Krayola.

Bubble Puppy scored a US Top 20 hit in 1969 with their single, "Hot Smoke & Sassafras". The name was a misheard line lifted from an episode of "The Beverly Hillbillies".The single peaked at number 14 on the Billboard 100 and number 15 (RPM) in Canada. In addition, the song was at the top of many radio station playlists over the spring of 1969. The song was also covered internationally by MGMT, a popular American psychedelic rock band, and by The Mooche in the UK.

In 1969, Bubble Puppy released their first full-length album, A Gathering of Promises. However, despite Bubble Puppy's early success with the "Hot Smoke & Sassafras" single, they experienced numerous conflicts with International Artists, and parted ways with the label in 1970.

Signing Nick St. Nicholas of Steppenwolf as a manager, Bubble Puppy moved to Los Angeles in 1970. Their name was changed to Demian (after Hermann Hesse's 1919 novel at the suggestion of their manager's wife); this was to avoid contractual difficulties with their previous record company but also because the former name appeared to link them with bubblegum music.

The group signed to ABC-Dunhill Records and released one self-titled album in 1971, but its failure to perform on the charts led to financial difficulties with the label and the group's breakup in 1972.

on March 19, 2011, three of the original members of Bubble Puppy reunited for the first time in 25 years for a performance at The Austin Music Awards. The band also added Mark Miller (guitar) and Jimmy Umstattd (bass) to the line-up. David Fore met the two while playing in Austin cover band, the Kopy Kats. David and Mark also played together in the mid-70's in another popular Austin cover band, Zeus. In April of 2013, Gregg Stegall joined the line-up taking Todd Potter's place in the band. Gregg has a long-standing musical affiliation with Mark and Jimmy dating back from the early 1970s.