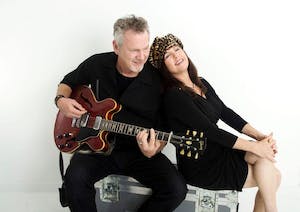 Kathy And The Kilowatts

With their 2018 Nola Blue Records release of “Premonition of Love”, and the successful 2017 release of “Let’s Do This Thing”, Kathy Murray and her band, the electrifying Kilowatts featuring Bill “Monster” Jones, reassert their place in the blues pantheon that helps Austin, TX keep its reputation as the Live Music Capital of the World.

This is far from Murray’s first time at the rodeo. For decades she has helped keep a spotlight on the Texas capital’s blues scene. She cut her teeth during the golden era of Austin’s blues and R&B, sharing the stage with the likes of Stevie Ray Vaughan, the Fabulous Thunderbirds and blues godfather W.C. Clark. In addition, she also took her rightful place among a veritable Murderer’s Row of formidable Austin blues women, including Marcia Ball, Lou Ann Barton and Angela Strehli. Along with the Kilowatts, she has shared the stage with headliners of the caliber of Albert Collins, Bobby “Blue” Bland, Albert King, Koko Taylor and others.

“The first night I saw a live band in Austin, I was 16,” Murray told the Austin Chronicle. “David (her brother, guitarist David Murray) was 14 and we snuck into the Armadillo World Headquarters where there was a triple bill of Storm, with Jimmie Vaughan, the Nightcrawlers with Stevie Ray, and Paul Ray & the Cobras. My little teen self was totally blown away!”

Throughout her professional evolution, the blues has been the foundation of Murray’s music and songwriting, but she’s never been just a one-trick pony. “My sound encompasses the influences of all of Texas’ rootsy regional music styles that I’ve been exposed to throughout my life: blues, swamp pop, rock, zydeco, soul, rockabilly and conjunto,” she says.

Born to a service family, Murray moved all over the country before her father settled the family in Austin upon his retirement in 1968. At the time, the city was experiencing the first stirrings of what would become a vibrant live music scene. Murray cut her musical teeth on her older sister’s Elvis 45s, later graduating to the blues-tinged country of George Jones and Hank Williams.