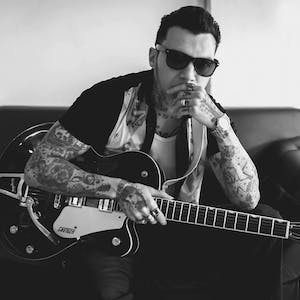 Phil Rocker (Felipe Ossa) is a musician from the city of Medellin, Colombia where he was born and still lives and performs. Phil first began playing the guitar 17 years ago.

His musical style includes influences from American Rock-N-Roll mixed with his academic study of music at Colombia’s Instituto de Bellas Artes (Institute of the Beautiful Arts) where he studied for four years. Other influences are from the more traditional musical heritage heard on the streets of Medellin, Colombia ranging from Tangos, Boleros, Tropical Music, Salsa, Pasillos and more.

Phil admires and emulates a wide variety musical artists from classics and contemporary to 1950’s Rock-N-Roll, Jump Blues, Rockabilly, Hillbilly and more. Artists he regularly listens to and looks up to include Carlos Santana, Nick Curran, Mike Ness of Social Distortion, Ronnie Dawson and many more.

Phil has single handedly grown the rockabilly genre in Colombia while also representing Colombian Rockabilly on tour internationally, including several large festivals such as Rock Calavera in Mexico and Rockabilly on the Route in the United States.

Phil’s work has been reviewed by local Colombian media as well as all over Latin America and the United States (including a profile by MTV Iggy).

Phil’s debut solo album VIVA-BOP!!! is the first step in the search for a unique sound that identifies Phil as a Latino Rock-N-Roller with a unique and important perspective.

The Rockabilly Hall of Fame in Nashville, Tennessee announced that Phil Rocker of Medellin, Colombia will be honored with a place on their wall.

The Rockabilly Hall of Fame has honored such Rock & Roll pioneers as Elvis presley,jhony cash,jerry lee lewis, Carl perkins and recognizes the work of Phil Rocker as a member of the second generation carrying the fire of Rockabilly to Latin America. Phil Rocker is the first non U.S. Latino on their wall.