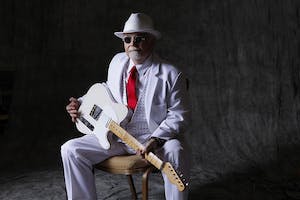 Whitey Johnson was the first guitar player I ever saw that amazed me, and I always go back to that parking lot in Garland, Texas when someone asks what made me want to play. It was Labor Day 1963 with the new asphalt oozing a black goo that would rob your flip flops if you didn’t keep moving. My baseball buddies and me were hot footin’ all around the shopping center carnival, rocking the Tilt-a-Whirl and the bumper cars and ruling the Fun House. Leon Phelps was my ride to the fair. His dad played mandolin in a bluegrass band called The Breakdown Boys, they were all mechanics, that played before the Valiants, who mostly covered Elvis and Jerry Lee, Little Richard and Fats Domino. The Valiants had the perfect look for a combo of their day, powder blue shirts, white dickies, tight black slacks, pointed toe white loafers, and razor-cut pompadours standing tall. Their outfits were complimented with matching white Fender Telecaster, Stratocaster, and Precision Bass with beige Fender amps. They were smoking and laughing at each other’s dirty jokes the whole time The Breakdown Boys played their set of crippled up Flatt and Scruggs and Bill Monroe stuff. Leon and I tried to look cool and act like rockers, like we didn’t like his dad’s band, even lighting up behind the flat-bed truck that was the stage while his dad was busy workin’ the mandolin and couldn’t see us.

About halfway through a tortured “Rocky Top” the Valiant’s drummer’s girlfriend, picture a very tired Tuesday Weld, came running to the back of the stage and let out with the news that Jimmy Rains, their lead guitar player, had missed his plane back from his grandfather’s funeral in Lubbock and would not make the show. The news hit them hard. Leon and I watched their lead singer, Randy, instantly drop his cool collected James Dean swagger and start pacing around his candy apple red ’57 Chevy, looking up at the cloudless sky crying, ” What are we gonna do, what are we gonna do, we can’t play without Jim, he’s the only one who knows the songs, we’re screwed” on and on. They really were screwed. Randy did not play an instrument, he only sang and looked dreamy eyed cool. The bass player, Billy Ray, could only play the patterns that Jimmy had tirelessly trained him to play on twelve songs and Ron, the organ player, could barely block out three note chords with his right hand. They had never considered playing any music without Jimmy. Then Randy lit up with an idea. “Hey what about that albino dude that Jimmy always talks about being the best picker in town, plays at the Holy Roller church”

“How do you think we’re gonna find him in fifteen minutes” the drummer said, shifting his girlfriend on his lap. “I know his mama is the cook at the Nite Owl, my cousin busses tables over there,” said Billy Ray. “Well, get her on the phone quick or we’re gonna have to pack up and get outta here ’cause if all these people see us standing around they’re gonna want us to play whether we’ve got a lead guitar player or not, and we’re gonna suck,” Randy said, as he flicked his cigarette away.

So I guess Billy Ray called Whitey’s mom and somehow they found him and told him to come on down to the fair, because about twenty minutes later Whitey and his brother came pulling up in an old Ford pickup with a Fender Super Reverb covered with a quilt strapped in the back. It was then that I first realized that Whitey was actually black, cause his brother was black. I had never heard the word albino and had no idea what that meant, but taking a good look at Whitey you could see that though he was white, he wasn’t like all us other white boys. Whitey’s hair had a yellowish tint that almost looked dyed, and was real frizzy in small tight curls. His lips were big like his brother’s, but his eyes were very light blue with pink eyelids that seemed irritated. He wore black slacks too short with white socks and black penny loafers with lightning strikes on the sides and a white short sleeve shirt with skinnny black tie, a uniform for a side musician. While his brother unloaded his amp and lifted it onto the stage, Whitey put his ear down close to his red Harmony Rocket to check his tuning, asking Ron to give him an E note from the organ. He then quickly adjusted the knobs on his amp, cranking up a healthy dose of treble and reverb. He struck a few notes to test his volume, then turned and looked around for the first time to face the Valiants.