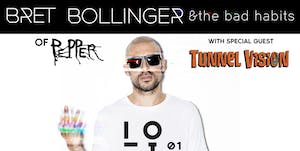 Bret Bollinger in an American musician who is best known as the lead singer and bassist for the rock band, Pepper. Bollinger was born in Kailua-Kona on the Big Island of Hawaii, and started Pepper his senior year of high school in 1997 with his childhood friends. Over the past two decades the band has sold over a million albums worldwide and toured extensively across the globe, including all of the United States and over 50 other countries.  Bollinger is currently launching a solo career having just released his debut LP, “LO-FI”, in November of 2018. LO-FI showcases a vintage reggae/rock sound, while also providing a fresh take on the genre.

unnel Vision is quickly becoming Southern California’s favorite new Surf, Reggae, Ska band. The band is comprised of five musicians who grew up in the San Clemente, area with instruments in their hands and skateboards and surfboards under their feet. Tunnel Vision originally formed as a three-piece band, with Hayden Hanson as the lead singer and guitarist, Jacob Hernandez on bass, and Tanner Payan on drums and additional vocals. The three have been long time friends, who grew up surfing spots like SC Pier, Calafia, 204’s, Black’s, Oceanside Jetty, Trestle’s, and T-street and Skateboarding iconic bowls like The Vans Combi, Encinitas YMCA, Clairemont, Carmel Valley and Oceanside’s MLK Skatepark.

Growing up in SoCal, the band was heavily influenced by the Punk Rock, Reggae and Ska Music of bands like The Descendents, Black Flag, Misfits, Sublime, Slightly Stoopid, The Expendables, NoFX, Rancid, and Reel Big Fish, etc. The boys have all worked in the surf industry for years, starting out in retail for Rip Curl and moving on to manufacturing surfboards for Lost Enterprises.