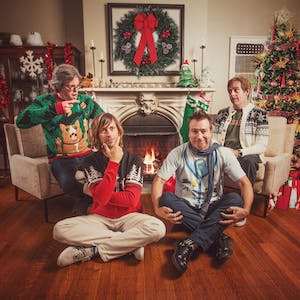 In 1996, Old 97’s recorded Too Far to Care. It was their major-label debut—following two independent releases and a year-long bidding war, the Dallas-based quartet had signed with Elektra Records. But rather than venture into some state-of-the-art studio in New York or LA, the band decamped to Village Productions in Tornillo, Texas, a remote facility in the middle of two thousand acres of pecan trees near the Mexican border, with a mixing board acquired from an engineer who had worked on some of Queen’s albums. Now over twenty years later, they have returned to record their eleventh studio album, Graveyard Whistling.

“Too Far To Care is the sound that best defined us,” says Rhett Miller, the lead singer and primary songwriter. “It was a really magical time, and we go back to it a lot in our collective memory.”

And so when it came time for the band—which still consists of the same four members: Miller, guitarist Ken Bethea, bassist Murry Hammond, and drummer Philip Peeples—to record their newest endeavor, producer Vance Powell brought up the idea of returning to Tornillo. “We knew instantly that it was the perfect move,” says Miller. “We weren’t trying to remake Too Far to Care, but to make something where fans would say, ‘This band hasn’t lost a step in twenty-some years.’”

The result is the eleven songs of Graveyard Whistling, from a group that has earned the respect and veneration as one of the pioneers of the alt-country movement, while still retaining the raucous energy, deceptive cleverness, and knockabout spirit that first distinguished them from the pack. The record comes out blazing with the breakneck shuffle of “I Don’t Want to Die in This Town” (based on a possibly apocryphal quote from Frank Sinatra), and maintaining that feverish intensity even when the tempo drops on songs like the more contemplative “All Who Wander.” Echoes of such barroom saints as the Replacements and the Pogues appear on sing-alongs “Bad Luck Charm” and “Irish Whiskey Pretty Girls,” but bigger and more mature issues simmer underneath the steamroller swing.

Returning to Tornillo was more than just a novelty, and proved key to the album’s direction. At some point renamed Sonic Ranch, the studio has been expanded and updated, but the band went back into the same recording space. They even stayed in the same bedrooms—Miller opened the drawer of his nightstand and found a note that he had written twenty years earlier.

“The time-travel element can’t be overstated,” says the singer. “It was a beautiful feeling of completing a circle—we’re the same people, but we had grown so much as bandmates and friends. It really made me believe in the power of experience and that you do get better with time. We’re capable of so much more now than we were two decades prior, but it also felt like we just took a coffee break in 1996 and now here we were, sitting back down to make a new record.”

After all this time, Old 97’s also found themselves in the interesting position of following up the most critically acclaimed, highest charting record of their career, 2014’s Most Messed Up. “We didn’t expect that kind of reception for Most Messed Up—in the current climate,” says Miller. “It was very cool, and weird, a great feeling but also a newfound pressure.

All it takes is an instant, and everything can change. For magician Michael Casey, that instant came when a sudden wind shear nearly flipped the first plane he ever got in. Overhead bins flew open. Flight attendants careened to the ground. As this was happening, something mysterious occurred inside Michael. Within hours of this brush with death, he began practicing magic. Maybe something touched him that day.

Now, twenty years into his craft, he is one of the most jaw-dropping close-up magicians on the East Coast. Once a hair’s breadth from the other side, Michael now conjures the unbelievable inches from your eyes. For the impossible to become possible, and skeptics to become believers, all it takes is an instant. Raised on the DIY ethics of punk rock, Michael’s mind-boggling performances and conversational style have made him a favorite among musicians. In addition to being the personal magician to Dierks Bentley and Sheryl Crow, Michael finds that performers such as Joe Walsh, Brad Paisley, Gavin Rosdale, and Chris Stapleton all count themselves fans.

The Old 97’s, Red Collar, The Frontbottoms, Menzingers, and Frank Turner (2012 Olympic Ceremony performer) have all asked him to open for them. In every case, audiences have walked away having seen things they’ll never forget.

THE TRAVELER IN TEN PARTS

2. It is called The Traveler, and it was written and performed by Rhett Miller, along with members of Black Prairie, a band based in Portland that plays everything from bluegrass to klezmer to country and shares some members with the Decembrists. The band (Black Prairie) entered the studio with the singer (Rhett Miller) and briskly recorded the songs that make up this album (The Traveler). Some additional guitars were added later by people who included Peter Buck and Scott McCaughey. I pass these facts along for your absorption.

3. The sun comes up. The sun goes down. We call it a day. The band entered the studio with the singer and made this album. Time passed. Now, months later, I have spent days listening with love, sadness, and unremitting fascination to the album, which you are now holding. By “holding,” I mean only that you have absorbed it into your own wires and circuitry. I am well aware that there are not always anymore physical holds involved in the absorption of music. Before I tell you more about The Traveler, I want to tell you a little bit about myself. I apologize for this. But the album you are holding, The Traveler, suggests that you cannot understand the journey that you are on unless you