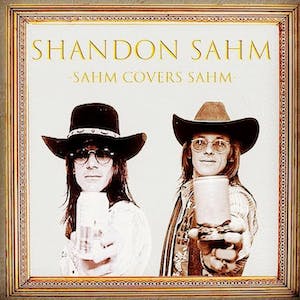 Shandon Sahm has embarked on his new solo career of singer-songwriter with his own style of contemporary alt-country and glam folk rock. After a successful 20-year run as a drummer, Shandon felt it was time to return to his alternative country roots and release a tribute album to his late father, Doug Sahm. During an interview Shandon once said, “I want to turn people on to Dad's music, but I don't feel I'm in his shadow."

This sentiment reflects the spirit behind Shandon's upcoming project, 'Sahm covers Sahm' to be released via Friendly Folk Records (2019). Album will feature Doug Sahm hits: 'Goodbye San Francisco-Hello Amsterdam', 'Shes About A Mover', 'Groovers Paradise', 'San Antone', and more. In addition a few of Shandon's original tunes will be showcased. As a preview to the album, Shandon will release the single, 'Give Back the Key to My Heart'. This track was originally written and released by his father in 1976, covered by country artists Uncle Tupelo (1993) and Dwight Yoakam (2008). Shandon will give the song his own unique twist and Sahm fans can expect the new single to be released next month, (Winter/2018). When you are Shandon Sahm, the creativity is always flowing. We are getting excited to see how his music evolves as he returns to Glam Folk genre with his Spring/2019 original album.

Shandon Sahm is perhaps best known for his thirteen years as drummer of the alt-country rock band, Meat Puppets (1999-2002)/(2009-2018) and Gibby Haynes and His Problem (Butthole Surfers/2004). Shandon also joined his infamous father, Doug Sahm in band known as Sir Douglas Quintet, in the 90's, and his drums can be heard on the album, 'Dreaming at Midnight'. In addition to drums, Shandon has pursued a successful career as singer-songwriter with two solo albums, Good Thoughts Are Better...' (2006); 'Knock Yourself Out' (2011). Shandon has been on several world tours and opened for many bands: Stone Temple Pilots, Sonic Youth, Soundgarden, Butthole Surfers, Dave Grohl, Soul Asylum, and more. Shandon traded his Texas home in Spring/2018 to follow his dream of living and making music in the Netherlands. Summer/2017, a few months before moving to Europe, Shandon was inducted into the Arizona Music Hall of Fame!

The Shelly Knight band is an original classic rock-style band from Austin, Texas, fronted by vocalist/song-writer Shelly Knight, who has been a D.J. for over half her life. After spending time with 'The South Austin Gospel Choir' in 1998, honing her skills in singing gospel and blues, Shelly developed her love for blues and classic rock in a style that's all her own. In 2001 she released the CD "Soulride" with current bass player Eric Leikam, which received critical acclaim and radio airplay both in the U.S. and in Europe, and helped launch the Right-On! Records label. In 2005 Shelly Knight teamed up with Fred Schultz on guitar who had spent some time in previous bands, including the infamous Joyfinger. In 2006, Shelly Knight and the Livin' Dead released their self-titled debut CD, earning airplay on central-Texas radio and receiving smashing reviews. The single "Radio" produced a video that went on to win awards at the 2006 Houston International Film Festival. The band's second CD release, "II", was released in October 2007, and also got rave reviews by all who heard it. Shelly and the band are currently putting the finishing touches on the record "III."