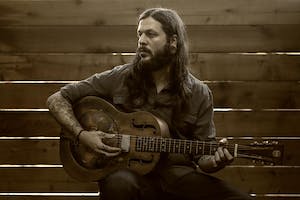 Take one listen to Shawn James’ music and you can hear his roots in the Mississippi delta by way of growing up on the fabled South Side of Chicago, his authentic, gutbucket blend of blues, folk, and soul music running the gamut of ecstatic joy and painful anguish.

His aching cover of Macy Gray’s “I Try” for GRAMMY.com’s “GRAMMY ReImagined” feature takes the original, a three-time nominee (for both Record and Song of the Year) and winner for Best Female Pop Vocal Performance at the 43rd Annual GRAMMY Awards in 2000 to the church, bringing out the wrenching anguish and yearning at its core. “The emotional heaviness of the lyrics is what drew me to it,” explains James. “People can relate on some level or another regarding love, loss, addiction, and the reaction to dealing with those things.”

James’s reimagining included “adding a depth of sorrow and darkness not just to the lyrics, but the ambience and delivery of the performance,” slowing the song down to emphasize the depth of feeling as he tries to say goodbye.

The singer-songwriter has previously released four full-length albums, including his debut, Shadows, a live record (Live at the Heartbreak House), a covers EP (The Madrid Sessions) and the original songs of his most recent effort, On the Shoulders of Giants. Hew newest offering, The Dark & The Light, was released on indie label Parts + Labor Records and produced and recorded by Jimmy Messer (AWOLNation, Kelly Clarkson, Kygo, The White Buffalo).

Nashville singer-songwriter Noah Vonne was heavily influenced by soul, blues, folk, pop, and a myriad of other musical influences during her upbringing in and around Texas. Originally from New Braunfels,TX, she began making a name for herself in the Austin and San Antonio music scenes by fronting a diverse range of bands from an early age (including appearing on a globally distributed record by the Kids Church Choir at Community Bible Church as a third grader) and creating the genre-bending, unique sound that she is known for.

Not long after she made her way to Nashville, TN, Noah performed with her band The Reckless Charms in front of a packed out Dolby Theater in Los Angeles for the hit television show, America's Got Talent, as well as released her 2017 debut EP Poor in Peace. The Nashville Scene described the EP's sound as "soul and R&B hewing.. reminiscent of Amy Winehouse," with tracks such as "Through With You" and the title track taking the audience through the trials and tribulations of mourning a fresh heartbreak.

2018 brought on healing and a whole new chapter as she embarked on a musical tour as the lead singer of a group that performed three daily shows on the Celebrity Cruise Line as it traveled around the world. Upon her return to the United States in 2019, Vonne immediately began touring and writing for her debut full-length record, due out in 2020.